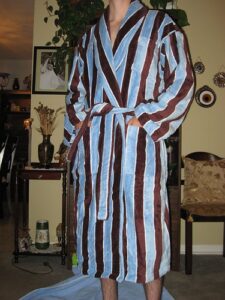 Typically, whatever we experience growing up in our family of origin, we consider to be normal. It is often not until we are exposed to something different that we realize that everyone doesn’t live this way. For example, in our household growing up, my family wore bathrobes around the house, sometimes even if we were fully dressed underneath. I had a friend or two who would visit who thought that was strange, but I never questioned the practice before then. Likewise, I thought it strange when I visited friends’ homes where the common practice was for family members to walk around the house in their underwear. That was something I had not been exposed to. I remember one time having to wait at the front door while my friend’s dad put his pants on before I could go inside. I learned that what was normal for me was viewed as odd to some of my friends—and vice versa.

Usually what is normal becomes acceptable. Little children who swear and use profanity are generally exposed to that type of language in their homes. They don’t see anything wrong with their behavior because it is what they know. Sadly, sometimes abuse is even accepted because it is the only thing that a child knows. They don’t understand that being beaten or molested is not acceptable by most standards. It is all they’ve ever known. Fortunately, this principle also applies to positive behaviors. If a child is constantly told she is loved and receives hugs and kisses regularly, those things become acceptable. Anything less is unacceptable to her, and she behaves accordingly.

The media are bombarding us with programming, stories, music and images to suggest to us that certain lifestyles are normal. Those of us who are old enough to have known a different era of media programming can see the vast shift that has taken place. Unfortunately, there is a generation of young people who only know this “new normal”. This is their only frame of reference, so they see nothing wrong or abnormal about it.

Prayer in schools or saluting the American flag was normal to several past generations, but is not normal today. The church building was at one time the gathering place and civic center for certain communities. There is now a generation that rarely attends church. At one time, it was normal to believe in God. Now, having belief in God often means a person is labeled unintelligent.

(Excerpted from The Silencing of the Sheep. Read the complete chapter titled, “The New Normal” for more.)